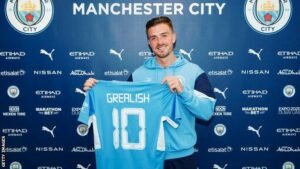 That tells you as much as you need to know about a Hammers team who, but for an unfortunate own goal, would have beaten Manchester City for the first time yesterday since the opening game of the season.

For those who are continually shouting “spend the money” that is something of a wake up call because for all of their possession, and Grealish in particular at times, the Hammers were more than City’s equal where it mattered – un front of goal.

Sadly. through ill health at times, I have been unable to get to the stadium as much as I would have wanted to this season but Grealish’s performance reminded me why being present is always an entirely different – and better – experience than watching on the box.

I felt nervous every time he was on the ball and that’s not something which is always the case when watching players on the tele.

We are following the producer and editor’ narrative of the game rather than our own and from the moment he started piling it on in the second half the atmosphere was very subdued indeed – you don’t get that in your living room.

In the end of course a fine defensive performance saw us take what could be a truly important point although it did occur that maybe the boss could have brought on Ryan Fredericks who with Vladi performed such a good job on Grealish at Villa Park last season.