Posted by Sean Whetstone on August 18, 2014 in Whispers 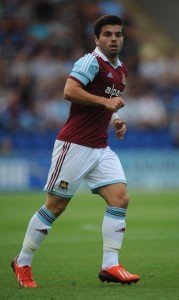 All Premier League clubs must submit a squad of up to 25 players, by 5pm on Monday, September 1st. With 20 squad numbers already allocated to players over 21 and two allocated to players under 21,  the 23rd number is about to allocated to Diafra Sakho subject to his international clearance. The big question will be who will fill the remaining places?

Each 25-man Premier League squad must include at least eight ‘home-grown’ players.  The ‘home-grown’ players do not have to be English. According to the Premier League: “A home grown player is defined as one who, irrespective of his nationality or age, has been registered with any club affiliated to the Football Association or the Welsh Football Association for a period, continuous or not, of three entire seasons or 36 months prior to his 21st birthday (or the end of the season during which he turns 21).”

West Ham have the luxury of  over half their current 22 man squad being classed under this home grown rule. Nolan, Poyet, Cresswell, O’Brien, Collins, Carroll  Tomkins, Jarvis, Downing, Morrison, Noble, Jenkinson, Vaz. Te and Cole are all classed as home grown talent.

In addition to the 25-man named squad, clubs can use an unlimited number of players aged 21 or under.

In practice this means Reece Burke (17), Josh Cullen (18) Elliot Lee and Diego Poyet (19) plus Danny Potts, Blair Turgott, Matthias Fanimo (all 20) and Ravel Morrison (21) but under 21 on 1st January) can be included in the squad without taking up a place in the squad of 25.