Posted by Sean Whetstone on October 13, 2019 in News, Whispers 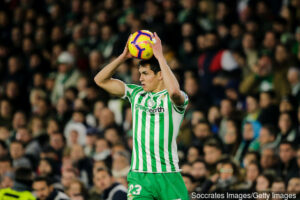 A report in the Spanish press over the weekend claims that  Aissa Mandi from Real Betis remains on Manuel Pellegrini’s wish list.

The report in Estadiodeportivo.com claims the 27-year-old  centre back who can also play at right-back or left-back also was subject of a failed 15 million euros (£13m) from the Hammers last summer.

The Algerian defender has 18 months remaining on his contract with his La Liga club although the Spanish club is keen to offer him a contract renewal and have a pending meeting with the player. His representatives say he has interest from a number of clubs across Europe suggesting that Betis may cash in.

Mandi joined Betis from Stade Reims in 2016 for £2.5m transfer fee having started his career in the French club’s youth academy.

A previous report in  El Desmarque claims that Mandi has a release clause worth £26 million inserted into his current contract with the La Liga side.