Supporters have say who should be dropped 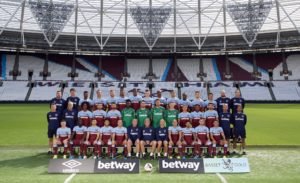 With Manuel Pellegrini confirming he has a fully fit side to face Watford with the exception of Winston Reid he faces a real selection headache, especially in midfield.

Yesterday in our Claret and Hugh poll we asked which attackers you would drop if the decision was yours.

With over 1,650 readers voting Pablo Fornals came out top to be dropped with 42% of the vote followed by Andriy Yarmolenko for the chop with over 38% of the vote.

Michail Antonio picked up just 13% of the vote to be dropped with Felipe Anderson got 5% and Manuel Lanzini just 2% of remaining votes.

If the manager was to follow that supporter poll on Saturday the starting XI would look something like this:
West Ham: Fabianski, Fredericks, Diop, Balbuena, Masuaku, Rice, Wilshere, Anderson, Lanzini, Antonio, Haller
Permalink

3 comments on “Supporters have say who should be dropped”