Posted by Sean Whetstone on September 14, 2019 in News 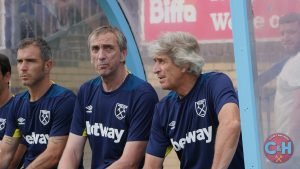 Claret and Hugh readers have been voting for their West Ham starting XI against Aston Villa. With 538 votes counted so far, we can now reveal the peoples vote so far for the Hammers line up on Monday.

Lukasz Fabianski got the maximum 537 votes so was a shoo-in between the sticks. Issa Diop 342 votes and Fabian Balneuna 180 form the centre back pairing with Angelo Ogbonna just behind on 163

There is still time to vote up to Sunday in our new feature at https://surveyhero.com/c/effee414

← ‘Let it go!’ Plea to put rubbish to bed once and for all
London Stadium owners want to change grass to stage more music concerts →
Click Here for Comments >