‘£9m Coufal’ better than the rest

Such was the level of all-round performance from West Ham against  Burnley on Monday evening, any one of half a dozen players could justifiably lay claim to the Man of the Match award.

But Thierry Henry, on duty alongside Jamie Carragher in the Sky Sports studio, was gushing in his praise for one player in particular – Vladimir Coufal our brilliant Czech right back. 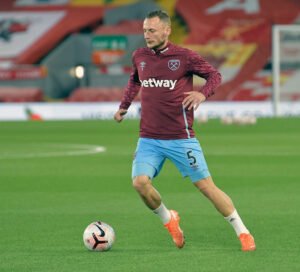 While Michail Antonio got the goals that ultimately won us the game and Said Benrahma put in what was surely his best performance so far in a claret and blue shirt, Coufal did what we’ve seen him do all season long, produce a commanding show of defending coupled with an even more eye-catching display of attacking down our right flank.

Henry was particularly impressed with the quality of Coufal’s crossing on the night, virtually every delivery causing the beleaguered Burnley defence all sorts of problems.

The former French international also heaped praise on Vlad for his role in the Hammers’ impressive counter attacking, with his pace and direct running frequently the springboard for turning solid defence into dangerous attack.

In terms of consistency of performance, is there a better right back in the entire Premier League this season? I have my doubts.

Comparing the main competition to Coufal for that top accolade – pound for pound our man is way out in front. According to the valuations given on ‘transfermarkt’ Liverpool’s Trent Alexander-Arnold is valued at £90m – Manchester City’s Karl Walker is reckoned to be worth £31.5m, Chelsea’s Reece James along Manchester United’s Aaron Wan-Bissaka are both valued at £36m. Coufal comes in at a mere £9m.

When you recall David Moyes actually paid Slavia Prague just £5.4m for Vladimir’s services back in October 2020 – it underlines just what a fantastic piece of business that has turned out to be.