A game too far as Irons fail to paper over the cracks!

So in the end it was West Ham’s vulnerability to set pieces which proved telling rather than Everton’s.

The fact that an opponent scores early against us with a soft goal from a corner should no longer be a shock. This is a familiar pattern which has plagued us all season.

At least in previous games we showed resilience to claw back from soft goals conceded not just against Huddersfield but Brighton amongst others. 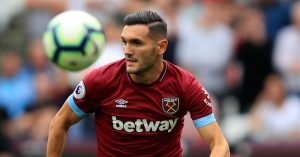 The cracks have been papered over by the fighting qualities of this team. Too often  we have had to rescue points. Today was a game too far.

The selection of Perez and Obiang, two of our poorest performers this season caused some consternation before kick-off. We can only conclude that Noble, Antonio and Hernandez must have been terrible in training.

Some blame will be laid at the door of Diop and Ogbonna.

However it is the tactics of set piece defending which must be urgently addressed. Without Carroll to rely on for his defensive heading, and certainly in the absence of Antonio, West Ham are much more likely to be overpowered at set pieces. Time and time again, in the first half, it was an Everton head which made first contact.

Quite what the point is of using the easily out muscled Perez and even Hernandez  (in the second half) to mark is not clear.

What is crystal clear is that Pellegrini’s preference for not stationing a player at least one, if not both posts, is placing Fabianski under enormous pressure.

Not positioning players at the post is fine if defenders are consistently clearing the ball. When opponents are instead consistently  winning headers a player like Perez would have a greater chance of preventing a goal by staying by the post.

You cannot reasonably expect him to out-muscle a centre back.