A must watch West Ham film

Posted by Sean Whetstone on November 17, 2019 in News, Whispers 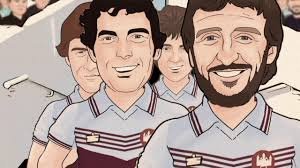 West Ham United were once a team famous for their attacking style of football and World Cup heroes, including charismatic captain Bobby Moore.

In this warm and nostalgic comic-book style documentary, John Lyall’s key acquisitions reminisce to tell the tale of how West Ham United moved into a new era – leaving the desperation of the late seventies, and into the hope and ambition of the eighties.

Canning Town Films have released a real labour of love after spending a thousand hours travelling up and down the country interviewing former Hammers, creating animations and hundreds of illustrations to make this 90-minute film called ‘Everybody’s Second Team’

Featuring interviews from David Cross, Alvin Martin, Phil Parkes, Ray Stewart, Stuart Pearson and  Mia Martyn it is a real trip down memory lane as the Hammers approach the 40th anniversary of winning the FA Cup in 1980.

Independent filmmaker Jay Stratford is charging just £1.99 to download and own the film on Amazon Prime Video to help cover his expenses making this film possible.

Watch it Online to download it now from https://www.amazon.co.uk/Everybodys-Second-Team-Alan-Devonshire/dp/B081HX1ZPV

2 comments on “A must watch West Ham film”