A shameful day in Hammers history as fans riot 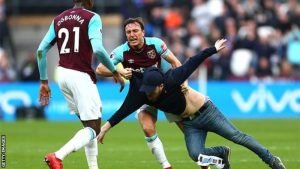 This goes down as perhaps the worst day in West Ham’s history – not because of a defeat at the hands of Burnley but because of crazed mindless so called fans  determined to shame themselves and the club we love.

Few of us will have seen such scenes as erupted after the Hammers conceded the first goal of the match when Burnley’s Barnes smashed home an unstoppable shot.

Protesters arrived on the pitch with Mark Noble trying to wrestle one of them away whilst after the second, four minutes later, all hell broke loose in front of the director’s box with stewards losing control.

David Gold, David Sullivan and their entourage were forced to leave their seats as the bitter and vile demonstration – which will have long term repercussions – went on and on.

My words cannot give any  impression the intense hatred that is now starting to destroy West Ham United.

For the record Wood added a third on the 81st minute as our team attempted to play against its own so called supporters who had created an atmosphere in which anybody would find it impossible to perform.

For the record we had the better of the first half with Arnautovic missing out on a couple of chances along with Lanzini and Mario.

But when the Clarets introduced a second striker after the break we simply couldn’t cope and any resistance we had disappeared with the first goal and the avalanche of hatred which followed.

Tonight I am ashamed to call myself a West Ham United supporter. Whatever we feel about the way our club is being run this was vile, hateful and a disgrace to everything we hold dear.

I really feel the people who want the board out may have succeeded but please tell me what happens then.

This wasn’t about football – this was about lunacy, madness and thuggery!

← The return of Hart doesn’t feel quite right
PlayerWatch: Hart returns and it’s another disaster →
Click Here for Comments >