A strange season and an even stranger Dutchman 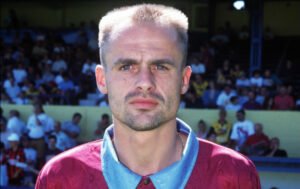 It came after a season of drama, and fans were hoping that the team could break away from the relegation battle. That hope was shared by the club and then-manager Harry Redknapp who made some interesting foreign signings that summer.

Redknapp decided to go for glory in the transfer market by gambling on players like Stan Lazaridis and Robbie Slater from Australia, as well as the subject of today’s story — Marco Boogers from the Netherlands. The signing of Boogers, in particular, made a huge splash with West Ham fans. 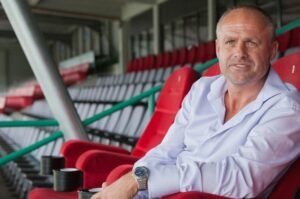 Despite the transfer figures we tend to see in the latest football news, the £1.5m fee was astronomical at the time. Many fans thought spending that much on a relatively unproven player was a bit ridiculous, to say the least. To make matters worse, the rumour at the time was that Boogers had been signed thanks to a videotape. This rumour was later confirmed by Harry Redknapp himself in his autobiography.

This was a different time when it comes to football transfers. Any football fan now knows that a well-edited compilation of skills and goals can make even the worst players look like a Ballon d’Or contender.

However, this was a time well before YouTube and people were a bit more gullible. Thanks to this, there was still some cautious optimism surrounding Boogers’ future at the club. Despite an underwhelming performance as a substitute in the first game of the season against Leeds United, fans were excited to see him in action at Old Trafford. Unfortunately, the action they saw was not exactly what they had expected.

Boogers came on as a substitute for Danny Williamson in the 74th minute of the game. The Hammers were trailing 2–1, and Redknapp hoped that bringing in another striker could give the team a chance for an equalizer.

Things did not exactly turn out that way. The Dutchman spent 12 minutes on the pitch in his second official game, before getting frustrated with watching the Manchester United players waste time by passing the ball around.

This frustration resulted in him tackling Gary Neville with what looked like an intention to kill. Thankfully, Gary survived the tackle, and even went on to finish the match, but Boogers was sent off immediately.

Footage of this glorious moment in the striker’s career is still available on YouTube. There’s also a quick clip of Redknapp’s response to the situation attached at the end. The manager said that he thought the player didn’t have an aggressive nature and that he got what he deserved for a moment of frustration.

Boogers had been suspended for four matches and came back for a cameo in November only to witness another defeat. This time it was 4–1 against Aston Villa. He played his last few minutes for West Ham about a month later as a substitute in a 4–2 defeat to Blackburn Rovers.

After this game, he had an MRI scan of his knee, and it was determined that he needed immediate surgery. He was given permission to return to his home country to recover and attend the birth of his son. Redknapp signed Iain Dowie that winter, which was another signal that the Dutchman did not have a future at the club.

That’s when Booger’s West Ham career ended. He never played another game for the Hammers and continued his footballing journey at RKC Waalwijk, FC Volendam and eventually Dodrecht where he even had a short managerial spell in the mid-2000s.