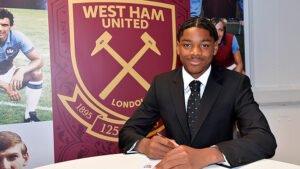 West Ham’s flourishing academy is once again set to save the Irons money in the transfer window with central defender Jamal Baptiste being eyed for first team opportunities.

The 18 year old is seen by manager David Moyes as a very serious prospect indeed and looks all set to follow Declan Rice and Ben Johnson as a break through star.

Speculation that Moyes may be ready to hit the January transfer window for a central defender following the injury to Angelo Ogbonna may well be very premature as a result.

Instead, we have learned that with Craig Dawson and Issa Diop available as likely first team starters  the manager see Baptiste as the next in line to make his squad presence felt.

And he looks likely to get his chance in the FA Cup competition as he bids to show what he is all about.

He made first appearance in the competition last season against Doncaster Rovers and was very impressive.

His former academy director and ClaretandHugh blogger Terry Westley has long declared that he will became a massive player for the club.

6 comments on “Academy prospect to save Irons window cash splash”