Adrian chances get a boost 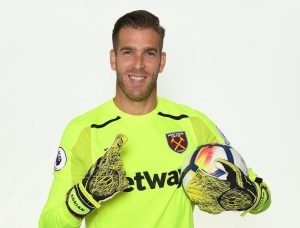 Adrian will be told to be told to fight to retain his position as No 1 when the the squad return to training at Rush Green next month.

There has been much speculation over his position following the arrival of Lukasz Fabianski from Swansea but insiders continue to insist the Spanish stopper still has a future at the club.

It’s now more than possible a second goalkeeper may not now be arriving given the readjustment of finances required to find the Manu Lanzini replacement.

As things look right now – according to a top insider – the manager needs to decide whether he is content with one new central defender rather than two or whether cash will be saved in the goalkeeping position.

Should he take the second option then Adrian has a real chance to reaffirm his position given that as things stand he remains No 1.

However,  he remains is in the last year of his contract and it seems highly unlikely  he will be in any great rush to sign a new deal until he sees how things have gone before the winter window.