Adrian scores again for the youngsters

Posted by Sean Whetstone on August 22, 2014 in Whispers 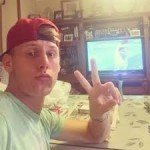 Adrian Wojcik Kosela scored the only the West Ham goal at the Boleyn Ground this evening for the Hammers Development team second league game of the season. Danny Potts and Reece Burke were notable absentees as they were left out of the development team  to be included in the first team squad tomorrow at Selhurst park. Wojcik Kosela came on as a substitute in 63rd minute for his proper debut and scored late in injury time just before the final whistle was blown. The game which was lost 2-1 is the second defeat of the season for the Academy youngsters after a successful pre season in which Elliot Lee scored 9 goals.

Adrian Wojcik Kosela previously scored in a West Ham shirt as an unnamed trialist against Sutton United at Gander Green Lane back in July in a pre season friendly.

The 20-year-old  striker qualifies for Poland through his mother despite being born in Spain. He previously played for Sevilla’s B and C teams plus Real Betis’ reserves. On social media he said pre match “Happy for my first call with the team! Tomorrow at 7 pm match against Southampton at the stadium” Post match he added  “1-2 defeat to Southampton! To keep improving and working! Happy for my first goal! Thank you all for the comments! Good night!”