Posted by Sean Whetstone on September 3, 2016 in News, Whispers 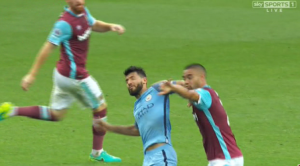 Aguero is also suspended for City’s home league game with Bournemouth on 17th September and the EFL Cup third-round match at Swansea on 21st September.

Manchester City have contested the violent conduct charge and argued that “the standard punishment would be clearly excessive”.

The mistakes bring up the age old debate whether referees are afraid of making big decisions against the so called top four sides. Surely it is time to introduce a video referee to the Premier League like FIFA have just announced.