All eyes on Arthur Masuaku 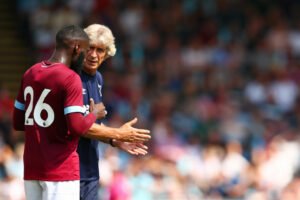 All eyes will be on the West Ham team sheet at 11.30 am on Saturday morning to see if Arthur Masuaku has been included in the match day squad.  The 26-year-old has been missing from Manuel Pellegrini’s match day squad for the last three Premier League games which has caused many supporters to ask what has happened to the left back.

Club insiders have insisted there has been no fall out between the player and the manager and have played down the notion of show down talks reported last week.

Masuaku’s DR Congo continued their qualifying campaign for the 2021 Africa Cup of Nations with a 2-2 draw in The Gambia on Monday evening with the defender starting the game to earn his seventh international cap proving his absence is not anything to do with an injury or match fitness.

The left back’s absence from the squad remains a mystery which will further deepen if he left out once again.

3 comments on “All eyes on Arthur Masuaku”