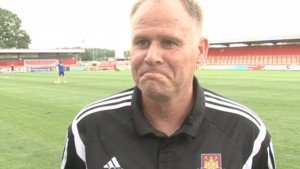 Sam Allardyce got caught in a couple of time warps this morning over the future of his Number 2 Neil McDonald.

Writing in the London Evening Standard he spoke only of his possible departure but claimed “he doesn’t need to leave.”

But when asked the same question by www.whufc.com when asked if he was leaving, the manager said:  “No I’m happy to say.”

He revealed that players were coming back from injury sfor the Hull game saying: “We’ve got James Collins back . The other players who have been out are unavailable for selection.”

But he explained that they were waiting on Cheikhou Kouyate returning from international duty.

He said: “We’ve had no signs that he’s got any problems, he might have a bit of fatigue from the two games he’s played. All the other internationals have come back OK.”

← Allardyce: Mo’s form fell after first season
Mooro in the raw …warts and all – a book to kill for →
Click Here for Comments >