Big Sam Allardyce will present a haunting figure when he swaggers into the London Stadium with his relegation threatened Crystal Palace side at the weekend.

Football is a game full of wicked ironies and sub plots and that will certainly be the case when the former Irons and England boss comes looking for points.

For the simple truth is that Slaven Bilic is now under the most severe pressure of his reign as West Ham boss and to put it even more simply: Allardyce could end it! 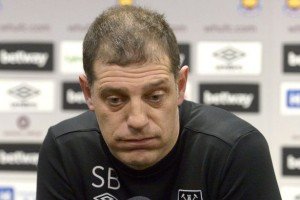 A mood unlike anything felt so far this season has developed around the corridors of power within the club since the utter humiliation of Friday night.

Whoever you want to blame, another five goal drubbing – taking the tally of goals against at home to 21 – is proving too much for some stomachs.

Defeat by an Allardyce-managed team would be far too much for anyone to take and it could even be that Slav would be dismissed immediately should it happen.

The other sub plot is the availability of Alan Pardew following his sacking from the same Crystal Palace and a man who has admitted he has unfinished business at West Ham.

Slaven Bilic is an essentially good man and reunited the Hammers fan base almost at a stroke last season because we all knew he was one of us – a man with incredible passion for the club and a believer in playing open and attacking football.

None of that will save him should it all go completely wrong over the next 90 or 180 minutes and Allardyce too may feel that he too has “unfinished business” at West Ham.

It’s a shoot-out where no prisoners can be taken.

ClaretandHugh was told today: “We cannot be beaten by Crystal Palace!” The message was clear. The manager is now in his Last Chance Saloon.

Some of us have everything crossed he doesn’t fall on an Allardyce-wielded sword but make no mistake we are in critical times.