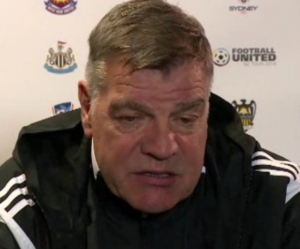 Sam Allardyce was disappointed to find Aston Villa keeper Brad Guzan in top form as the Hammers failed to find the net in a goal-less draw against Aston Villa.

The Irons boss watched his team create a host of chancesbefore being left to” respect the point.”

He said: We’re disappointed given the amount of chances of excellent quality we created but the keeper was in a fantastic mood. It was unfortunate and disappointing for us to come out with just a point.”

Allardyce then gave a litany of opportunities and setbacks which on another day might have gone the way of the Irons.

He said: “There was a definite penalty on Alex Song and a handball which may have given us another. Then one of theirs came off with injury when it was Carlton Cole who had been fouled and that could have been another penalty.

“We have dominated in the latter stages and the first half was ours so it was all very frustrating. I really thought the goal would come but then Guzan produced a wonderful save near the end.”