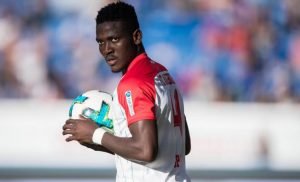 David Moyes is closing in on a free transfer for Augsburg defender Daniel Opare.

African football website Soka25East.com claims the  27-year-old is out of contract  after parting ways with German side two days ago following discipline issues.

The former Ashanti Gold Star was prevented from leaving Augsburg during the January transfer which is believed to have caused the rift between him and the Bundesliga outfit.

The Ghanaian international who has 16 caps for his country has been featuring prominently for Augsburg this season, and his performances are attracting interest from clubs around Europe.

A number of Europe’s top clubs have looked at snapping the defender including Everton, Stoke and Leicester in addition to the Hammers.

The report says the Hammers are confident they have won the race for his signature adding that Moyes has been watching him for a number of years, and had been sending scouts to keep an eye on his progress.

6 comments on “Another free agent could join West Ham”