Another Hammer could leave before Wednesday 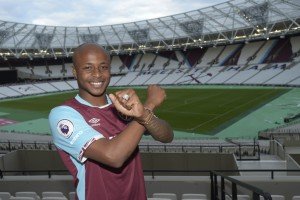 David Moyes has admitted that another West Ham player could leave the club before the transfer window closes on Wednesday.

Asked whether anyone else could follow Sakho out the door Moyes answered:“Possibly. You know the way football is, we have had offers from clubs and whether those offers improve then it might make things look like it but other than that, we are getting to the end and we’ll be glad when it’s offer.”

That player is said to be Andre Ayew and the improved offer is expected to come from his former club Swansea City.

Tonight Sky reports claim that West Ham has turned down a bid of £18m and are holding out for £20m adding that West Ham are tonight asking for Swansea midfielder Ki Sung-Yueng to be included in a swap deal for Andre Ayew.

Although Ayew would be allowed to leave if his valuation is met West Ham would want to be confident that could guarantee a replacement before the deadline closes.

4 comments on “Another Hammer could leave before Wednesday”