Another Hammer is sent out on loan 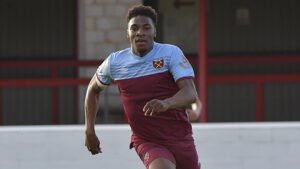 2-year-old Academy centre forward Oladapo Afolayan has been sent out on loan to fifth-tier team Dover Athletic for the remainder of the season. The young striker joined West Ham from non-league club Solihull Moors on transfer deadline day in January 2018 on a three and a half year contract.

The Harrow-born striker attended Chelsea’s Academy as a youngster before his family moved to Canada, where he continued his footballing education with Toronto FC.

On returning to England at the age of 18, Afolayan began studying for a civil engineering degree at Loughborough University before being snapped up by National League club Solihull, for whom he scored 16 goals in 38 matches, and also spending time at the Jamie Vardy V9 Football Academy.

He spent six years in the Chelsea Academy as a youngster between the ages of nine and 15, played in the same youth team as England age-group internationals Tammy Abraham and Dominic Solanke and Nigeria full-back Ola Aina.

After joining West Ham he played in the Hammers U23’s team before he was loaned out to EFL League Two club Oldham Athletic for the second half of the 2018/19 season and has just finished a loan with EFL League Two side Mansfield Town  which finished on 2nd January 2020.