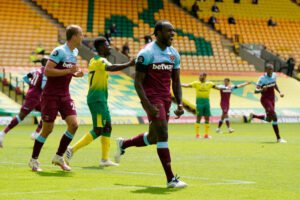 Michail Antonio has received the highest ever Claret and Hugh West Ham player rating since we launched the rating system.

Michail scored an average score of 9.73 with over 300 Claret and Hugh readers submitting their ratings.

Tomas Soucek was second-placed a long way behind Michail on an average score of 7.99 followed by Jarrod Bowen on 7.66 then Declan Rice on 7.31 and finally Mark Noble on 7.26.

Aaron Cresswell achieved an average score of 6.74 while Ryan Fredericks wasn’t far behind on 6.68

Fabianski who didn’t have much to do was relegated down to an average score of 6.63 while Pablo Fornals got the final six score of 6.44.

The only score under six was Seb Haller 4. 9and Jack Wilshere 5.13 bought on as late substitutes on 78th minutes.

Fabian Balbuena, Arthur Masuaku and Yarmolenko results were excluded as they each played for a few minutes at the very end.