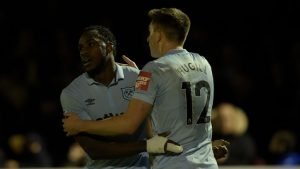 A Michail Antonio brace helped West Ham edge out Dagenham in the #SaveTheDaggers fundraising match last night which ended 3-1 with two goals from Michail Antonio and a late strike from Jordan Hugill.

Antonio scored in both halves in front of a 4,515-strong crowd which included many West Ham fans at the Chigwell Construction Stadium. Hugill marked his first start for West Ham with his debut goal three minutes from the end.

James Collins appeared to come off injured over fears he has pulled his hamstring in the friendly but that has yet to be confirmed.

“It is brilliant, I found out on Friday and I couldn’t believe it,” Gary told the local press. “It will be surreal to be in the dugout. I am a West Ham season ticket holder and have followed Dagenham since 1996, so to manage them is special and to do it in a game with both teams playing is brilliant.”