Posted by Dave Langton on December 26, 2022 in News, Whispers

David Moyes has been able to select Mikey Antonio up front against Arsenal on Monday.

The Hammers are going into the game on a run of three successive defeats, and are looking to climb clear of the relegation zone. 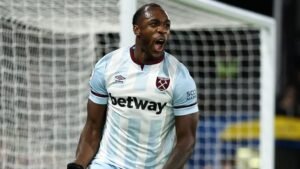 There were doubts over Antonio’s fitness heading into the game, but he has recovered in time to feature and will start up front against the Gunners.

Elsewhere, the team is much the same as one would expect.

Lukasz Fabianski is in goal, with a back four of Vlad Coufal, Craig Dawson, Thilo Kehrer, and Aaron Cresswell.

Declan Rice plays after featuring for England at the World Cup, alongside Tomas Soucek in midfield.

The front three behind Antonio is made up of Said Benrahma, Lucas Paqueta, and Jarrod Bowen.