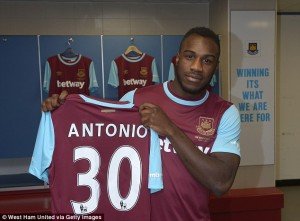 Michail Antonio has revealed he thought he was about to join West Bromwich Albion before he was told West Ham had put a bid out of the blue for him.

Speaking to BBC Radio 5Live Antonio said ‘I thought I might be signing for West Brom, there was loads of links, but nothing with West Ham.”

‘I didn’t really hear anything until I basically signed the contract, it came out of the blue.”

‘They (West Brom) put a bid in and I thought I would end up in Birmingham, but now I’m in London, back home.’

← Farewell Boleyn: Tears, winks and on TV – what a day
Hendrie returns to West Ham →
Click Here for Comments >