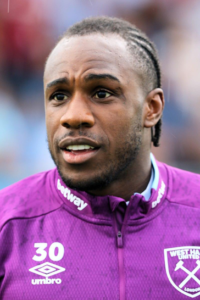 West Ham are prepared to reward Michail Antonio for his work in helping the side remain safely ensconced within the English Premier League. The 30-year-old forward caught fire in the restart to the season.

Antonio scored eight goals in his last nine matches to help David Moyes’ side retain their place in the EPL. His performance earned Antonio the EA Sports EPL Player of the Month Award for July, an accomplishment he proudly boasted about on his Twitter feed.

“I hit the best form of my career so far at the end of the season,” Antonio posted. “Winning the Player Of The Month award caps it off perfectly! Can’t wait to get back out there.”

The West Ham United forward scored an impressive eight goals during the month of July. After netting in a 3-2 victory against Chelsea and in a draw at Newcastle United, Antonio went on to score all four goals in a 4-0 win at Norwich City. He became only the ninth player to accomplish this feat in an away Premier League match.

Antonio became the first West Ham player to score four goals in a Premier League match. He was the first Hammers player with a hat-trick in an away match since Tony Cottee in 1987.

He’s About To Get Paid

Even though there’s no contractual need to rush on a new pact with Antonio, The Hammers are ready to deliver a healthy increase to the English striker’s stipend.

According to numbers published by The Guardian, Antonio currently earns approximately £70,000 a week. That level puts him below West Ham’s highest-paid players.

Felipe Anderson, Jack Wilshere, Andriy Yarmolenko and Sebastien Haller are all on deals worth somewhere in the region of £100,000 a week. Brazilian winger Anderson, who’s fallen out of favour with Moyes, is expected to be moved this summer.

However, while it’s known that West Ham desire to sell some players first in order to create cash flow to permit signings, the club insists that one of the players going out the door won’t be Declan Rice. The England midfielder/centre back is coveted by Chelsea but West Ham officials are adamant that Rice will be staying put.

West Ham are in competition with Crystal Palace for the services of Queens Park Rangers forward Eberechi Eze, who could work in partnership up front with Antonio.

On Sept. 1st, 2015, West Ham acquired Antonio on a transfer from Nottingham Forest for around £7 million on a four-year contract with an option for a further two years. That’s the reason why the team doesn’t need to up Antonio’s pay stub. They are doing so because he has earned the money.

Antonio has made his stance clear. He has no desire to depart from London Stadium. His 10 goals this season were a career high, one more than the nine he scored for West Ham in 2016-17. That season, he was named West Ham United Hammer of the Year.

Antonio admitted that the 2019-20 campaign was a roller coaster ride for him. He suffered a hamstring injury. His father passed away. And like everyone else, he was left locked down with his emotions when the COVID-19 pandemic hit in March.

As well, he and his wife welcomed their fourth child in June.

“Crazy season!,” Antonio tweeted. “Tearing my hamstring, COVID & my dad passing. Just want to thank God for keeping me strong & helping me get through. Dad we did it, you will forever be in my heart, the happiest, funniest man I’ve ever known.

Still Work To Be Done

West Ham may have survived to fight another Premier League season but the odds are still stacked against the Hammers. The opening lines at the best online sports betting sites show West Ham as one of the largest underdogs to win the title, suggesting that another season of staving off relegation is anticipated by the experts.

The Hammers are in a group with Aston Villa, Brighton, Burnley, Crystal Palace and newly-promoted Fulham at odds of +50,000.