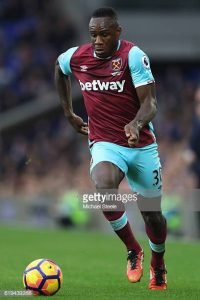 An interesting sub-plot to the main event  will be played out at Selhurst Park tomorrow as a face-0ff between Wilfried Zaha and Michail Antonio takes place.

It’s well known that Zaha could be on his way from the Palace this January and that he only failed to make a move to Everton on deadline day when a bid for Michail from Roy Hodgson was turned down by the Hammers.

Tomorrow the pair will show off their relative merits and let’s hope ‘Woy’ will be left ruing the fact he couldn’t tempt our current top man away from us after tracking him for months.

Both are set to come into the game in top form but Palace have only won once at home in the last five Premier League games whilst the Irons have won on the road twice since David Martin took over in goal from Roberto.

Word is that he will be between the sticks again tomorrow (Thurs ) with Fab returning for the Leicester match and with Antonio is outstanding form I’m expecting us to come away with something.

← Cress reckons it’s all been there to see!
Antonio crashes Lamborghini →
Click Here for Comments >