West Ham are keeping a close eye on Jordan Pickford at Everton amid reports that Alphonse Areola is wanted by Fulham.

The French goalkeeper is wanted by the Cottagers as they prepare for life back in the Premier League; they are 17 points clear of third place. 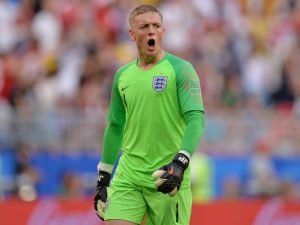 Reports in France claim that the Cottagers will again make an effort to bring him in, although the Hammers do have an option to buy him this summer or bring him in again on loan.

However, the Irons are keeping tabs on Pickford amid Everton’s relegation battle.

The Toffees lost to Burnley on Wednesday and are now 17th, just one point clear of the Clarets. They have to play the likes of Manchester United, Liverpool, Chelsea, Arsenal and Leicester, twice, before the end of the season.

And if they do go down, the Irons could try to do a deal for the England international as he bids to remain in the Premier League ahead of the 2022 World Cup in November.

Spurs could also try to bring him in as they look for a long-term replacement to Hugo Lloris, and there is a feeling that the Irons could upgrade their goalkeeping situation with a move for Pickford.

That would potentially lead to Areola going to Fulham, and Lukasz Fabianski and Pickford duking it out for the No.1 shirt.

← Declan avenues surely closed
Dec’s footballing father figure: ‘Keeping him is down to the Hammers but forget talk about him being a Chelsea fan →
Click Here for Comments >