Posted by Sean Whetstone on February 8, 2018 in News, Whispers 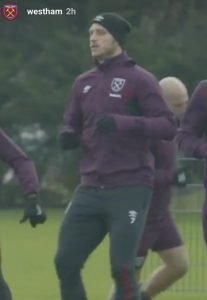 Marko Arnautovic has returned to training with the first team this week and there are hopes he could be available for selection on Saturday as West Ham face Watford at the London Stadium.

Arnautovic was pictured in training today in an official West Ham United Snapchat video alongside new recruit Patrice Evra. The Austrian has been sidelined since the 1-1 draw with Bournemouth on January 20th having picked up a minor hamstring injury which didn’t fully surface until after he had completed 90 minutes.

His recovery is ahead of schedule and the medical staff are said to be pleased with the progress he has made and are optimistic he can pass a fitness test to either be included on the bench or make a start for the 3 pm Saturday match.

2 comments on “Arnautovic returns to training”