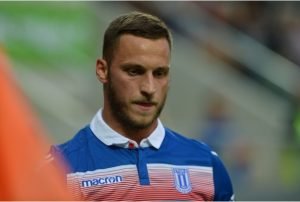 Stoke have reluctantly admitted defeat in their attempts to convince Marko Arnautovic to withdraw his request to leave and the player said his goodbyes to teammates at their Clayton Wood training ground today ahead of an imminent £23m switch claims the Stoke Sentinel this evening.

The 28-year-old joined Stoke from £2.6m from Werder Bremen as one of Mark Hughes’s first signing in 2013 and they are now set to make a handsome profit.

The paper adds that the Austria showman arrived at Stoke on the back of difficult spells at Inter Milan and Werder Bremen, who will receive about £440,000 as part of a sell-on clause.

He scored six and set up a further five in the league last season as Stoke finished in 13th in the Premier League.

As we reported earlier today Slaven Bilic has been told he must sacrifice Feghouli or Snodgrass to bring in Arnautovic to West Ham but he keen to retain all three within the squad.