Marko Arnautovic and Samir Nasri have both been picked to start against Arsenal in the Saturday lunchtime kick-off.

The Austria international, of course, has been the subject of much media speculation this week after a bid from China was tabled for his services. 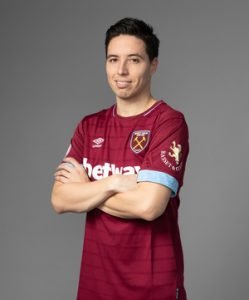 Nasri, meanwhile, makes his return to Premier League football, having previously played for the Gunners between 2008 and 2011.

He last played in the English top-flight in 2017.

Lukasz Fabianski starts in goal, with a back four of Pablo Zabaleta, Angelo Ogbonna, Issa Diop and Aaron Cresswell.

Declan Rice, Mark Noble and Nasri make up the midfield, while Michail Antonio and Felipe Anderson will look to provide support to Arnie up front.