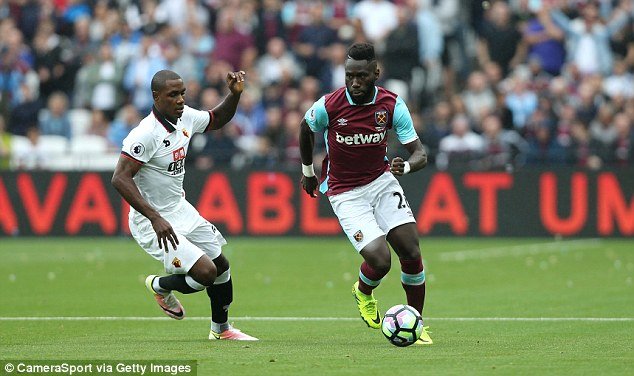 Arthur Masuaku has poured cold water over suggestions that Marko Arnautovic has an identity crisis  with Zlatan Ibrahimovic.

The left sided midfielder – having already described the Hammers record signing as ” a beast” reckons that Arnie is very much his own man who owes nothing to anybody.

He said: People used to say he tries to show he’s a bit like Zlatan, but not at all. You just go to him and laugh. He’s just normal, an easy guy.”

He added that as tonight’s game against Stoke City looms the players are determined not to get into staying up targets.

He said: “We haven’t set a target of points to be safe, we just take the games one at a time. It’s a big opportunity to move away from the relegation zone.

“If we play the game the way we did against Southampton and Chelsea we’ll win it. We need to be strong and compact, we don’t have to be under any kind of ­pressure, just take the game as it comes and that will be it.”

And of his own return to action after suspension he declared: “I just had to be patient and I waited my time, so now I’m back and that’s the most important thing. I was working on my fitness, my crosses and my position with the gaffer and his assistants.