Posted by Sean Whetstone on October 1, 2019 in News 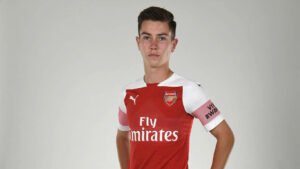 The 17-year-old attacking midfielder has played twice for the Hammers Under-18s and marked his debut with two goals against Norwich City.

The youngster has allegedly told pals he is keen to sign a permanent deal as he is a West Ham fan and believes he has more chance to break through there than at Arsenal.

The teenager has just started the second year of a two-year Gunners scholarship which he signed in the summer of 2018.

Flaherty previously told Arsenal.com last year “I’m naturally a playmaking attacking midfielder. I was first spotted by Arsenal at around eight years of age playing for my Sunday side, but I’d already been approached by Watford. I was there for a couple of seasons but the Arsenal scout kept in touch and I decided to join the Gunners as an under-11, so this is my sixth year in the academy”