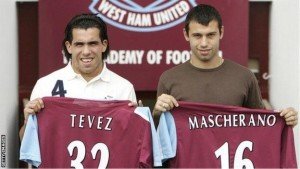 Arsenal opted against signing Carlos Tevez and Javier Mascherano on loan back in 2006 due to concerns over who held the player registrations.According to a report from the Athletic, the Gunners’ chief transfer negotiator Dick Law was contacted by the club’s vice-chairman David Dein about the pair before West Ham were approached.

It is claimed that Dein had been offered Tevez and Mascherano, who were playing for Brazilian club Corinthians at the time, by super agent and Arsenal fan Kia Joorabchian. They were available for a £1.5m loan fee each but Arsenal rejected Joorabchian’s proposal and the duo so he moved his attention to  West Ham United instead.

Speaking about the deal back in December, the former Hammers boss Alan Pardew said: “That scenario was a strange one because they weren’t players that I had targeted; they weren’t the players in the transfer window that I’d wanted, in terms of positions but of course, they’re two World Cup stars!

“You can’t turn that down so when the chief executive turned to me (with a day of the window to go) I was like: ‘Where’s James Milner?’

“That’s who I was expecting to raid up and down the right. In comparison to what he is now, 10-15 years ago he was perfect for us.