Posted by Dave Langton on November 26, 2022 in News, Whispers

Harrison Ashby’s hopes have been raised that he may get a West Ham reprieve before the January transfer window.

The expectation at the club has consistently been that Ashby will leave once the January window opens, with Newcastle and Leeds both sniffing around. 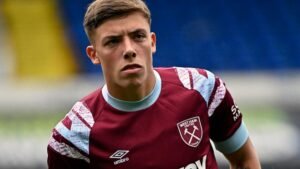 The right-back has struggled immensely for minutes at the London Stadium and remains on just seven first-team appearances.

Ashby played 90 minutes against Viborg in the Europa Conference League qualifiers this season, and was later limited to a substitute appearance against FCSB in the group stages.

He has not played a minute of Premier League football this season.

But the injury sustained by Kurt Zouma, for which he needed surgery, has led to the likelihood of Thilo Kehrer being moved back to centre-back.

That opens a spot at right-back, and Ashby will be hopeful that David Moyes shows his faith in him by giving him the opportunity to play.

Of course, Vlad Coufal and Ben Johnson are also options, but Ashby will be banging on the door to  be given a chance at the London Stadium.