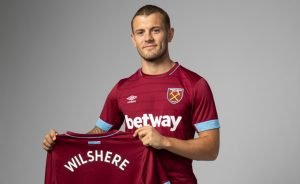 An astonishing claim from the Daily Mail that Jack Wilshere could earn himself a Hammers contract extension comes on the back of a report that he is now fully recovered from his troublesome pelvic injury and will be fit to return for West Ham once the season recommences.

The story says that the break in proceedings has allowed the injury to heal and that he is now fully recovered from the problem which of course follows various others in his troubled London Stadium career.

If that’s true it’s the story of the year but it fails to mention that after so long out of action it’s highly unlikely that he will be back to anything near match fitness.

It adds that the news will come as a “huge boost” for David Moyes and insists that Wilshere is  now ready to play a full part in the final games should they get played.

And in one of the most optimistic sentences written maybe it declares: “A successful run in the team could yet see the Hammers try to renegotiate an extension with the former England international or, alternatively, some impressive performances could attract suitors into taking advantage of his contractual situation.”

The second part of that is the best part from a Hammers point of vie because – apart from anything else – it’s difficult to see him replacing any of Declan Rice, Jarrod Bowen, Tomas Soucek , Pablo Fornals and Moyes favourites Mark Noble or Robert Snodgrass.

The reality is that if the Irons can find a way of a mutual parting of the ways they will take it although it’s always been unlikely that the player will be ready to take a cut on his highly lucrative.

Nobody disputes that a fully fit Wilshere is a big asset but recovery from yet another long injury looks like too little too late as far as the Irons are concerned.