At last – Hammers squad back together

The Hammers squad has today returned to training at Rush Green as part of a plan for them all to remain in peak condition. 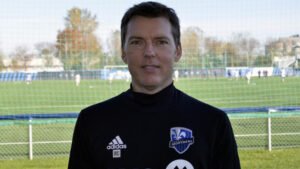 The squad will report and take to the Rush Green pitches only today for a non-contact drills-based session in an open-air environment.

All players reporting are fit and well, but extra precautions will be taken to remove any risks to health, including no showers or food eaten on site.

In a website statement at www.whufc.com the club says: All players are following their regular guidelines around diet and nutrition, with personal meal plans provided to keep them on track, while a skeleton staff is in place so that all team operations continue to function as normal.

Individual training plans have been created for every player in the men’s and women’s first-team and Academy squads to follow, with fitness and physical data constantly tracked by staff.

Medical support for all players and their families is available 24/7 and injured players are continuing in line with their rehabilitation and recovery programmes.

Steps continue to be taken to maintain general fitness and condition until further guidance on the restart of the campaign is provided by the Premier League, with the safety and well being of all players and staff always being at the forefront of planning.

All training sites and Club offices at London Stadium underwent further deep cleans this past weekend and we will continue to update our supporters on our official channels as the situation develops or changes.

ClaretandHugh says: Good to hear this news with the panic surrounding the health scare currently engulfing the country. Until now the players have been involved in individual fitness programmes  but at last they are back together in a deeply cleansed Rush Green. It also gives hope that somehow sometime soon an answer will be found to the thorny end of season issue which is concentrating so many minds. With the manager giving his own statement this morning and now the club revealing the latest moves within the squad, nobody should complain they are being kept short on information. It’s good to be able to say a well done to the media department because us over at CandH received this is a much needed reminder that normality could be on its way back sooner than many might have believed. Ok, maybe that’s optimistic but we been a bit of that right now.