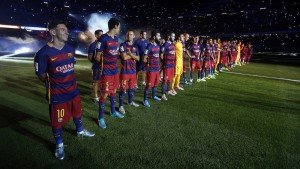 Hopes that Barcelona would agree to playing a pre-season friendly at the Olympic Stadium took a knock this morning as negotiations with the Catalan giants founder.

Reports arose yesterday evening that the opening fixture at the Olympic Stadium could be “an amazing pre-season friendly against the mighty Barcelona.”

And it’s true that the club have been in touch with the most attractive club in world football – along with various others – as they attempt to kick-off life at Stratford in style.

However, ClaretandHugh was told this morning when contacting our top club insider: “We offered them over £1 million but we can’t get them to agree. They have so many offers but it’s not about money for them.

“It’s a very difficult one to book and bed down anyway because there is a very good chance of us being in Europe ourselves and we would have to see what round we would enter.”

Our source explained that other clubs such as Real Madrid and AC Milan had been approached but added: “There are no agreements with anybody because our possible European involvement makes the situation particularly awkward.”

← Noble for England debate – Irons fans react
Boleyn a fortress as we prepare to leave! →
Click Here for Comments >