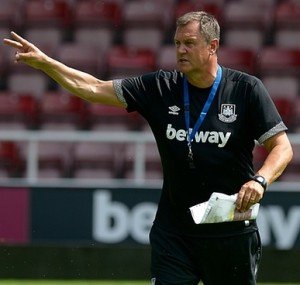 Bargain boy Xande Silva has became an instant hit with academy boss Terry Westley who reckons the Portuguese striker could achieve great things in the claret and blue.

Westley was as impressed as everyone else as the 21 year old smashed home a six minute hat-trick to see off the Spurs under-23s at Stevenage last night.

And speaking to ClaretandHugh this afternoon Terry explained: “At under 23 level he’s going to prove a serious handful against any team we meet.

“He is so quick over zero to five yards and has the ability to nick the ball off defenders  and get in behind them. He also has a seriously powerful right foot and hits the ball so cleanly.

Last night he scored very different types of goal and was entirely composed about it all – a good player!

He is a very powerful striker and he will be given the season to settle in  – it’s down to him what sort of impact he can make at the higher level but he has made a seriously good start. Fair to say we really like the look of him!”

One comment on “Bargain buy striker a “serious handful””