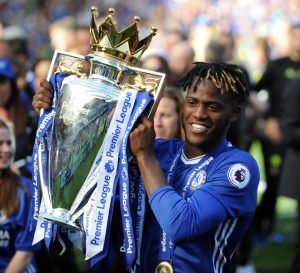 Michy Batshuayi has confessed he could head out of Chelsea on loan with West Ham keen to land the striker.

Batshuayi told Belgian outlet Het Nieuwsblad: “Honestly, I’m not trying to think too much about my future.

“It will be up to the board and the coach to decide. I’m the player, I go where Chelsea send me.”

West Ham had hoped to tempt Chelsea with an outright purchase of the player they missed out on last Summer. They were even prepared to give their West London rivals on what they paid for him.

Despite the Hammers having a bid accepted of 39m Euros (around £33m)  last Summer Chelsea snuck in at the eleventh hour and increased the offer to 40m Euros to seal the deal over the Irons.

Despite a reduced role at Chelsea, Batushuayi scored four goals in his final three league games and finished the season with a record of scoring every 47 minutes.