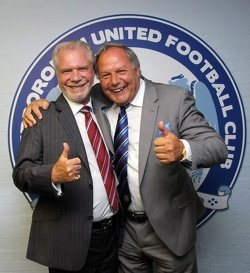 Barry Fry remains as close to the two Davids today as he was at Birmingham City where, despite being fired, the laugh-a-minute Peterborough Director of Football has maintained a long friendship with the Irons owners.

Last season he loaned Martin Samuelsen and swooped yesterday to take former Hammer, George Moncur to the Posh from Barnsley.

Here – as a man who knows our owners better than most – ClaretandHugh’s big pal ‘Bazza’ discusses the club which he believes is becoming more and more important in English football.

Never in my life did I think I’d see the day when the Irons invested £20 million in a player. Everyone will have their own opinion on whether Andrew Ayew is value for money but the figures being paid out show the size of the ambition at this great London club.

And that doesn’t surprise me one little bit knowing the Davids  and having worked for them I know these two guys are the most ambitious men in the world – particularly for their beloved West Ham.

And let’s not forget Karren Brady who is a great operator. I believe the deal to get the Olympic Stadium was the best ever in the history of football and that was down to her.

By my reckoning they have spent around £50m – £60m in the close season and the deal which brough Zaza shows they have moved into the top tier of signings.

We all know about Payet who for me was the signing of last year anywhere – never mind the Premier League and young Antonio has been a sensation. He should be mine and everybody’s type of guy. A fighter and battler who shows that anything – whatever your beginnings – is possible. He’s worth an absolute fortune.

Then there was Ogbonna – what a defender and of course Lanzini. They have looked and found players others would die for and are wondering how on earth they missed them.

The two Davids will never stop. They have to achieve, things have to get better and better. Every Hammers fans I talk to is delighted with them and can’t believe their luck – so they bloody should be.

These guys are total winners and will take the Irons higher and higher!

O I moved for George Moncur yesterday – a player I’ve rated for a very long time. We went for him when Colchester were relegated but missed out.

However, he chose Barnsely but hasn’t been playing for them and I was delighted to get him at the second attempt – despite it being on loan.

He scored a mob of goals for Colchester and had a lot of assist and is deadly in the final third. He was brought up in the WH Way and is the ideal person to take over from Martin Samuelsen who I was forced to send back to the Hammers.

2 comments on “Bazza: Davids will take Irons higher and higher”