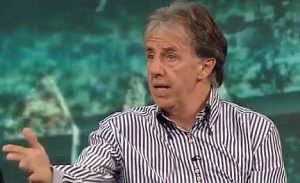 BBC pundit Mark Lawrenson believes the Hammers will get back to winning ways today with a 2-0 win over Southampton at the London Stadium this afternoon.

Writing on the BBC website Lawro told his readers

“Southampton’s away form has been very good this season but I just think this such a huge game for West Ham that they will know they have to win. The Hammers were very competitive and combative against Liverpool on Monday night, and looked better defensively – apart from Lukasz Fabianski’s mistakes.

I know David Moyes’ side scored twice, so it might sound a bit silly, but I just felt they did not create enough chances considering how well they played.

They were at Anfield and playing against the runaway leaders, though, so no-one was expecting them to get anything. Things will be very different on Saturday.”

West Ham remains in the relegation zone in 18th place on 24 points after 27 games but a win today could move them up to 16th place depending Bournemouth’s result against Chelsea.  Aston Villa is playing in the EFL cup final against Manchester City so cannot score any Premier League points,