Posted by Sean Whetstone on August 3, 2014 in Whispers 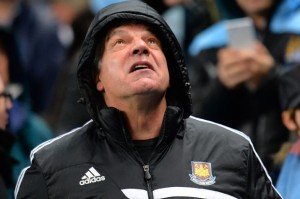 The relationship between the Hammers fans and manger Sam Allardyce has plunged to new depths after he was covered with a pint of beer after he is alleged to have laughed at fans who called for him to play more attacking football following the latest pre season defeat this afternoon. According to an eye witness Willis Jamieson who watched the match which he described as boring, the incident occurred post match as the manager and players walked to their waiting coaches. Willis explained Big Sam was walking out alone at the time when he was covered by the pint of beer kicked from a over head ledge above with roughly 20 West Ham supporters above him. “He just carried on walking but it did stop his laughing”  said Willis.

It is understood the board told Allardyce he needs to improve his relationship with the fans this season following a revolt at the end of last season, this has all the marks of further deterioration. While throwing a pint of beer is extreme way to make a point the alleged laughing at fans lobbying Sam to play more attractive football was bound to antagonise them.   One bright spark on social media whipped Big Sam should “Respect the PINT!”