Brentford boss in the dark over Hogan’s future

Posted by Sean Whetstone on January 28, 2017 in News, Whispers 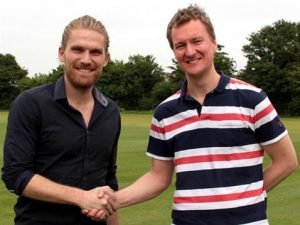 The striker hadn’t featured for the Bees since the 3-1 win at Birmingham at the start of the year after intense speculation surrounding his future until coming off the bench at Stamford Bridge.

Smith told reporters  after the game: “I have no idea whether Scott will leave. You’d have to ask my directors of football.

“Lasse Vibe and Romaine Sawyers have done well. Scott’s not started in three weeks so it was always the plan to bring him on after an hour. Whether it happens or not, I don’t know. I’m thinking about Aston Villa and Scott is in those plans.”

Phil Giles and Rasmus Ankersen are the co-directors of football at Brentford. Rasmus was appointed in 2015 is also the chairman of Danish side Midtjylland which is owned by Bee’s co-owner Matthew Benham. Giles,  also appointed in 2015 has been the Head of Quantitative Sports Research at Smartodds, a company also owned by Benham, since 2010.

It is these two people that Benham trusts with the footballing decisions made at Brentwood including the sale of Scott Hogan.