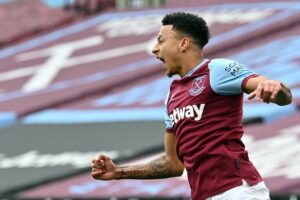 Jesse Lingard is EA Sports Premier League Player of the Month for April!

The Manchester United loanee’s fabulous form since arriving at the Irons has drawn an entirely justified response from the judging panel.

That form has seen him become the fans ‘must have player this summer and he has even forced his way back into the international team.

After being nominated for the award in both February and March, the 28-year-old made it third time lucky.

Maybe he was unlucky to have to wait so long but whatever happens next he is going to be absolutely key to our chances of Euro qualification over the last three games.

He heads to Brighton tomorrow (Sat) looking to increase his goals tally from the current nine before the final two games of the season against West Bromwich Albion and Southampton.

Commenting on the award an absolutely delighted Jesse declared: “It’s amazing. It’s the first time in my career that I’ve received this award and I’d obviously like to thank the fans for voting, my teammates and staff for helping me get there.

It’s been a long road and I’ve been nominated the last two months and even getting nominated was a great feeling for me as I want to be up there with the best and competing for the best awards.

“I definitely think I’m in the best form of my career. I’ve always wanted to work on consistency in my game and I think it’s come at a good time. Playing regular football always helps and I want to improve every game and try and help the team get as many wins as possible.”

2 comments on “Big award for Jesse”