Big Porto test on the cards 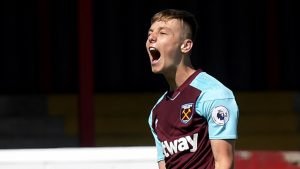 The Poruguese outfit beat Sunderland and Arsenal respectively in previous seasons to win the  trophy and represent the toughest of tests for our boys after that defeat.

Kemp ,having returned from a nearly year off injured, toldwww.whufc.com: “Friday was a difficult night. Giving them three early goals was always going to give us a mountain to climb.

“Tuesday gives us a chance to put it behind us though and it will be a difficult test. You want to be playing the best teams and that’s how you improve. It’s another tough game for us but it’s time to stand up and be counted.

Kemp is watching U 23s team mates stepping into first team action and added:  “With people like Dec and Grady, you want that to be you and that’s what I work every day towards, trying to get a game for the first team but also working on myself as a player.

“We’re over at Rush Green training now and the manager gets to see us and it’s easier to make an impression. Every time you get a chance, you have to take it.

“It’s great for me to be back and get a lot of games and it’s another big game. I feel good; sharp, and there’s a lot more to come.”

The match kicks off  at 7pm at Dagenham and Redbridge’s Chigwell Construction Stadium. Season Ticket Holders and Claret Members can attend the game free of charge, while tickets for other adults and concessions are priced at £5 and £3 respectively.