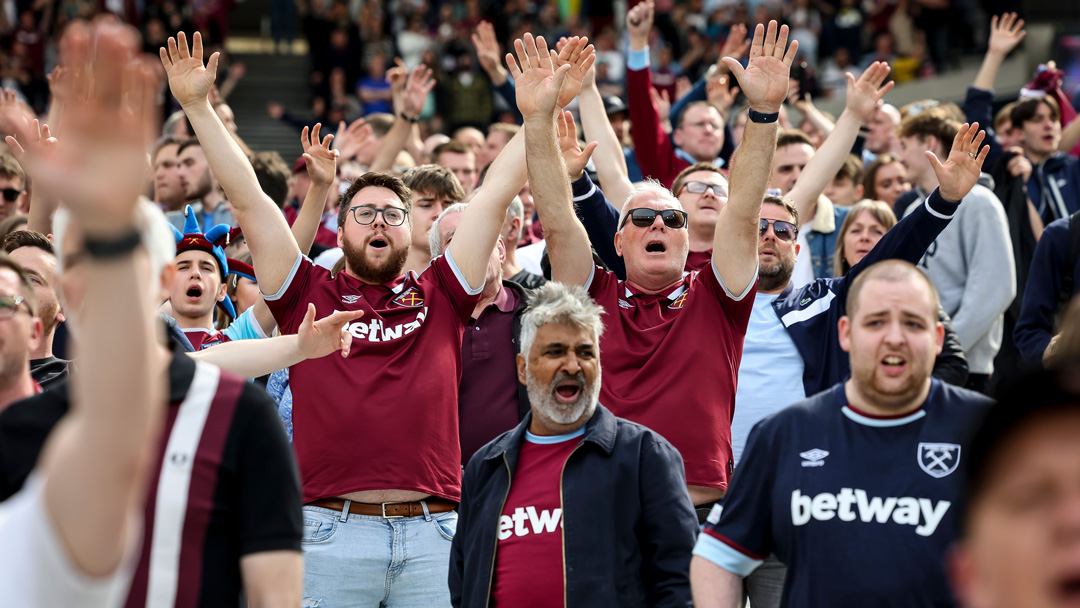 The Hammers will today play in front of the biggest home attendance in the club’s 127 year history – 62, 500 – as they head into a seriously tough clash against Manchester City.

A total of 55,000 season tickets have been sold – the highest ever – and the Club has made what it claims are exciting changes in a bid to further enhance the matchday experience.

David Moyes has thanked Hammers fans for their magnificent support, saying: “It’s fantastic that so many of our loyal Season Ticket Holders have renewed in record numbers again. Our fans never fail to amaze me, they give the team and the Club such magnificent support.

“We had so many brilliant memories last season – to see the fans enjoying themselves in the Premier League and the Europa League was something we will never forget.

“I’m so happy that they are going to have another European tour to look forward to in the upcoming campaign and I just want to say thank you on behalf of the team to all of our supporters.”

And Captain Declan Rice added: “We’re all really looking forward to the start of the season – and playing in front of 62,500 supporters at London Stadium.

“We enjoyed some massive moments last season and with the capacity increasing by 2,500, everyone is excited about the campaign ahead.”

With the visit of reigning Premier League champions Manchester City on Sunday now a complete sell-out, the only way to secure a seat for our opening day fixture is via the ticket exchange by clicking here.

Click here to join the Priority List now but demand is at an all time high. With the expansion to 62,500 seats, though, there’s still opportunity to be at London Stadium this season. Becoming a Claret Member gives  priority access to tickets before other fans, as well as a £5 discount for each match and other exclusive benefits. Click here to become a Claret Member.

The club says the increase in capacity at London Stadium is a step forward for the Club in ultimately reaching the stadium’s full capacity, which would see West Ham United’s home in the Queen Elizabeth Olympic Park become the biggest Premier League ground in London.

And the club says fFurther matchday stadium enhancements have been added  with the installation of a new permanent catering and refreshment facility running the length of the Billy Bonds Stand.

A total of ten individual Heineken bars have been added, delivering food and drink along nearly 110 metres of the concourse, with 150 new draught taps included.

One comment on “Biggest ever home crowd at stadium today”