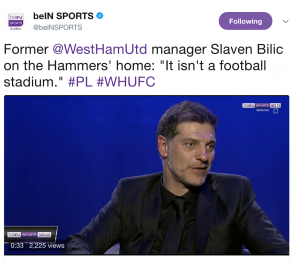 ‘When you say it doesn’t feel like Upton Park, it is kind of negative. London Stadium is like a new home, you love it but not the same.

It takes time, it is the same here. Some many things are brilliant about it”

It appears Bilic has had a change of heart and now feels he is free to share his real thoughts on the former Olympic Stadium.

4 comments on “Bilic gives his honest view on London Stadium”