Posted by Sean Whetstone on August 3, 2016 in News 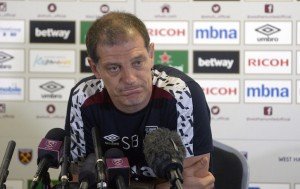 “Dimitri is joining us later in the week and we will not have have James Collins or Angelo Ogbonna available for the game. It is too early for them and they have not had the right amount of training.We are without a few injured players like Cresswell, but we have a good team and have been training hard.”

On a replacement for Aaron Creswell Bilic said:  “We were looking to strengthen our squad in that area, even before Aaron got injured as it was the only position that we didn’t have options.Aaron is a very fit player and since he joined the Club a couple of seasons ago, he has only missed one game and Carl Jenkinson had to play on the left side.We were looking to bring someone in to have competition with Cressy. We like to have two good players in every position. We are not the only ones looking for a new left back and it is hard to find a good player who we like. With Cressy get inured it has now become a priority and we have a few options there. Players like Sam Byram, Angelo Ogbonna and Havard Nordtveit can play there but it is not their natural position. We are close to getting one of the new players.”

On Lanzini Bilic added: “Lanzini is another blow for us. He was with us for the first part of the pre-season tour in America and then joined up with the Argentina team for the Olympics and got injured in a friendly game against Columbia. He got a kick on his knee. It was not a big injury but he cannot play for four or five weeks. I think he will miss the first three Premier League games which is not ideal so he will hopefully be back after the Manchester City game.”