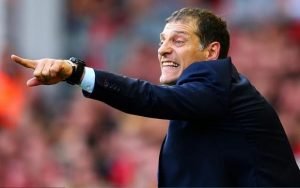 The former Stoke Player was Bilic’s top choice to join the Irons in the summer and the club splashed out £24 million to make it happen.

And Bilic has poured the pressure on him to ensure that he gives full value for money telling him it’s time “to push the borders.”

After the game the manager said: “I could have asked for more. I want him to do more. He’s got that quality and that something extra.

“I like him as a player but sometimes he gets happy with the few things that he does when I want him to push the borders.

“I know what he’s capable of and I want him to keep molesting the opposition and never be happy in a positive way. But of course he did the job here.

“After what happened last month, this is the beginning of the comeback for him.”